The 3D Digital Modeling, Imaging, and Printing Working Group was created to explore the use of 3D technologies to expand access to the Library’s collections. In Fall 2019, the working group launched a pilot in which a limited selection of items from the online collections were 3D scanned and the 3D models made publicly available. In the blog post below, I share what it was like to be trained to build 3D models alongside other Library staff, how we collaborated as a cross-functional working group, and lay out the potential uses of the models we created as part of the LOC 3D pilot project.

Library’s 3D models go live!
Ask anyone what is held in the Library of Congress collections and they will give you the obvious answer: books. Lots and lots of books.

Up until last month, I would’ve said the same thing. Since joining the Library of Congress 3D Digital Modeling, Imaging, and Printing Working Group, however, I’ve discovered that the world’s largest library in fact houses many three-dimensional objects ranging from casts of President’s hands to banjos to medieval vellum manuscripts. What’s more—you can now see some of them online as 3D objects!

The core purpose of the 3D Working Group chaired by Educational Resource Specialist Stephen Wesson is to explore ways to bring these physical artifacts to life online for users. I was lucky enough to come aboard just as the group launched a pilot project to create and display 3D models of objects held in our collections. To this end, 13 staff from all across the Library’s service units became certified in photogrammetry, a process that combines photography and the use of software to create digital, web-viewable 3D models.

As the week went on, and my photogrammetry skills grew, I became more and more awestruck by the diversity of content in our holdings and how the Library could realistically present them to the broadest range of users. Two-dimensional photographs were clearly not going to cut it.

By working and learning together with open minds and collaborative spirits, our group was able to create 3D models of a bronze casting of President Abraham Lincoln’s hand and of a manuscript from the 12th century in a mere four days. I’m proud to say that the models of Lincoln’s hand and the Exposicio mistica are now available as the LOC 3D experiment on labs.loc.gov . I promise that these 3D models will be far more interesting than the rest of this blog post so, please, take the time to check them out! 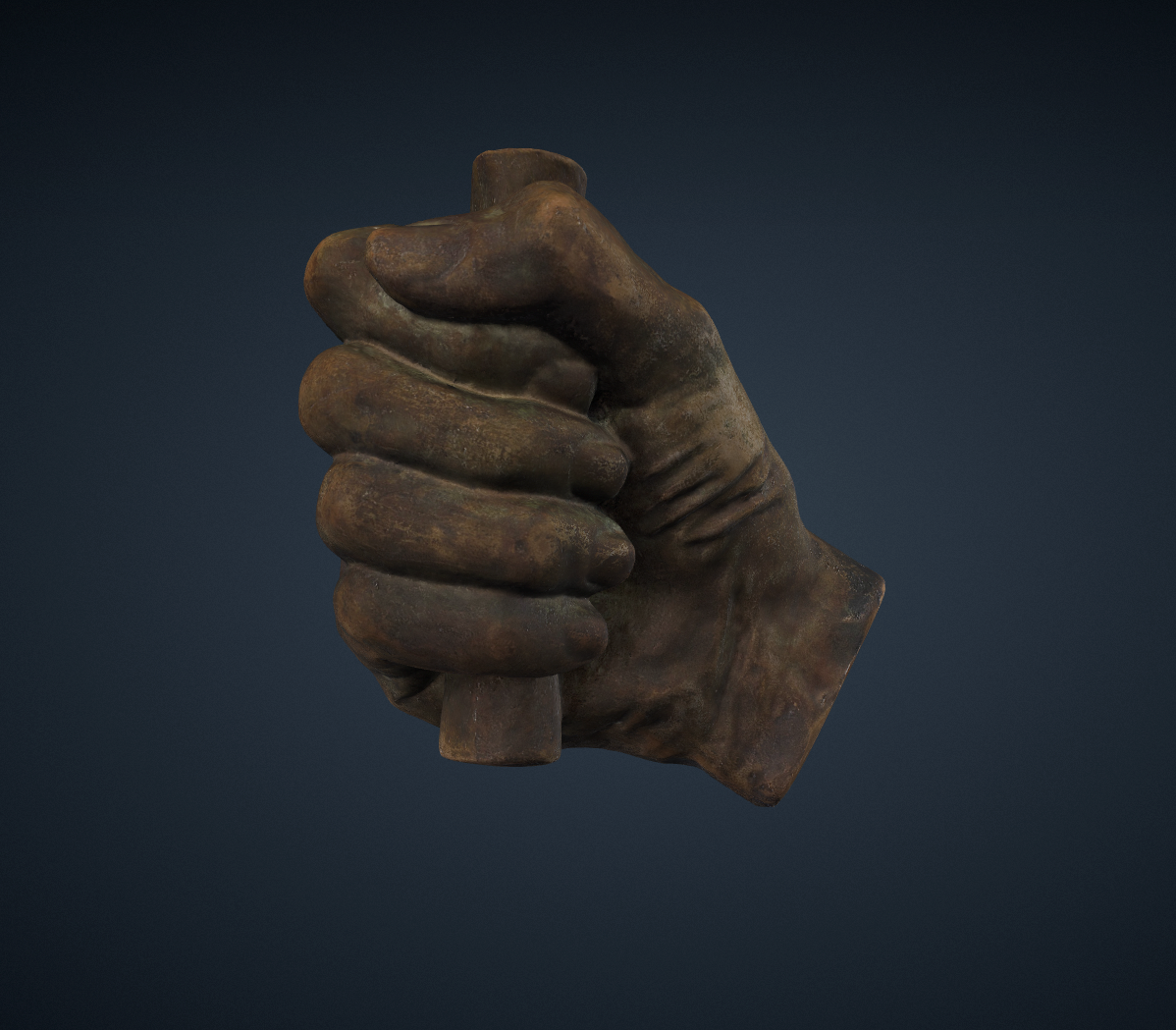 3D model of a casting of Abraham Lincoln’s right hand. This model was created by Library staff during their photogrammetry training.

Learning how to build 3D models was only part of the fun. Another, perhaps even bigger, part of it was getting to witness firsthand the “real treasure of the Library of Congress,” as Director of Digital Strategy Kate Zwaard often says: its staff. As the week went on, I developed a strong affinity and respect for my colleagues and the diverse range of perspectives and scope of work represented in the room.

The various members of the working group and the staff being trained represented the Digitization Services Section, the Digital Scan Center, the Rare Books and Manuscripts Division, Learning and Innovation Office, Design and Development Directorate, Conservation, and the Digital Strategy Directorate. All of us brought to bear different interests and goals for the pilot spanning from research applications, 3D printing technologies, preservation, and digitization services.

For educators
The Learning & Innovation Office, who spearheaded the creation of the working group, sees the project as a unique possibility for the Library to serve students and educators.

In addition to viewing the 3D models online, users will be able to download STL files, which can then be used to create 3D prints of objects for use in classroom settings. Wesson tells us that “working with 3D objects becomes a tremendous opportunity for discovery; it allows learners to explore these objects in ways that they haven’t been able to before. And most importantly, it sparks ideas for future investigation.” 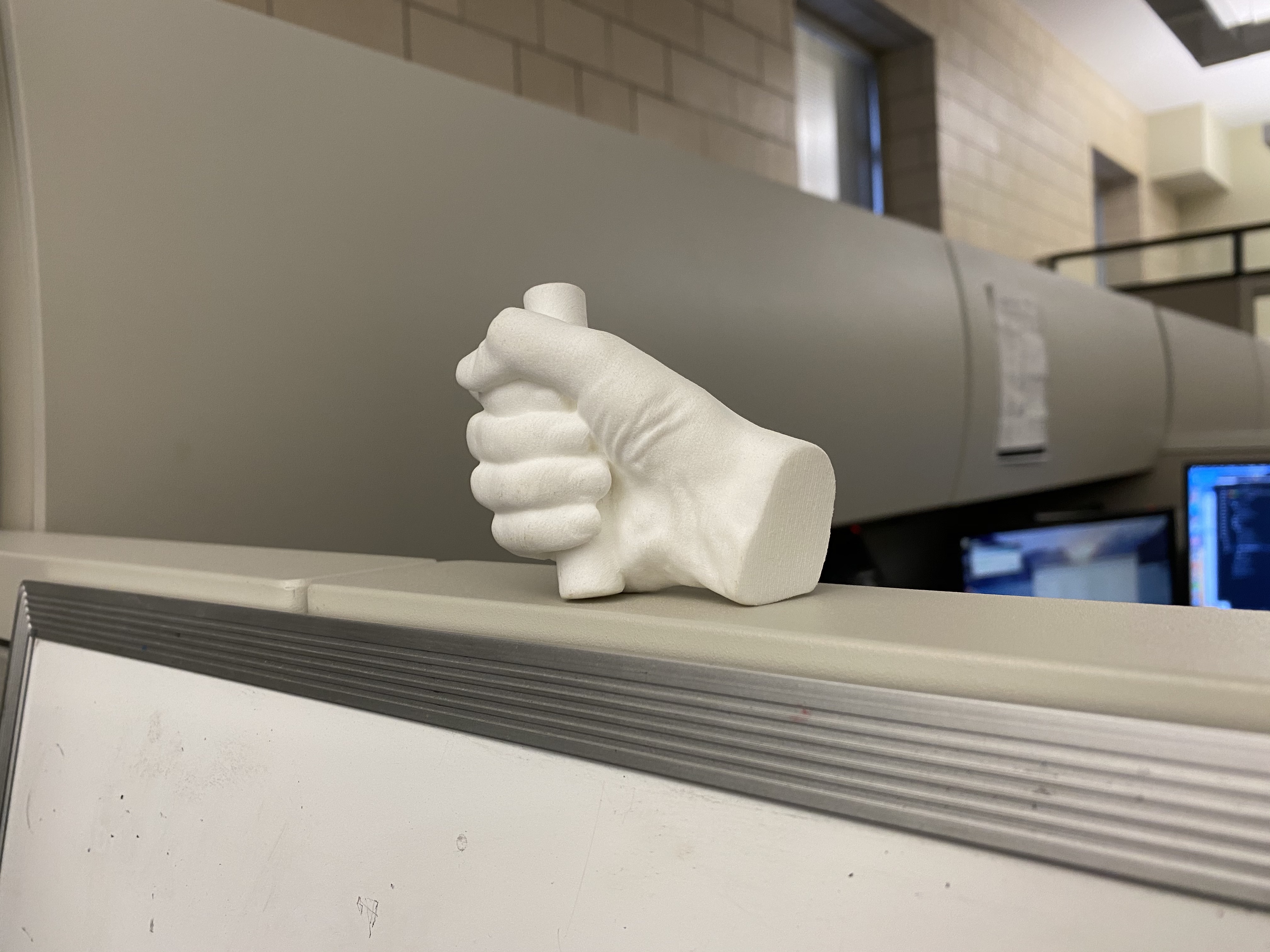 A 3D print of Lincoln’s hand made from the digital model created by staff.

For researchers
Many of the collections stewards who volunteered items from their collection for the pilot were also interested in scholarly and preservation-related questions emerging from this new mode of inquiry.

Already, viewing these objects as 3D models has allowed Library staff to identify novel applications of the technology for understanding their collections. For example, curator Eric Frazier, saw a potential use of photogrammetry for exploring the textures of early printed books without physically touching the materials themselves.

Mark Dimunation, Chief of the Rare Books and Special Collections Division, discussed the pilot in an interview with LC Labs videographer Kinedy Bareto. Dimunation observed that his team’s participation in this pilot project is a way to “keep the story of the object alive,” which he views as central to the Library’s mission. 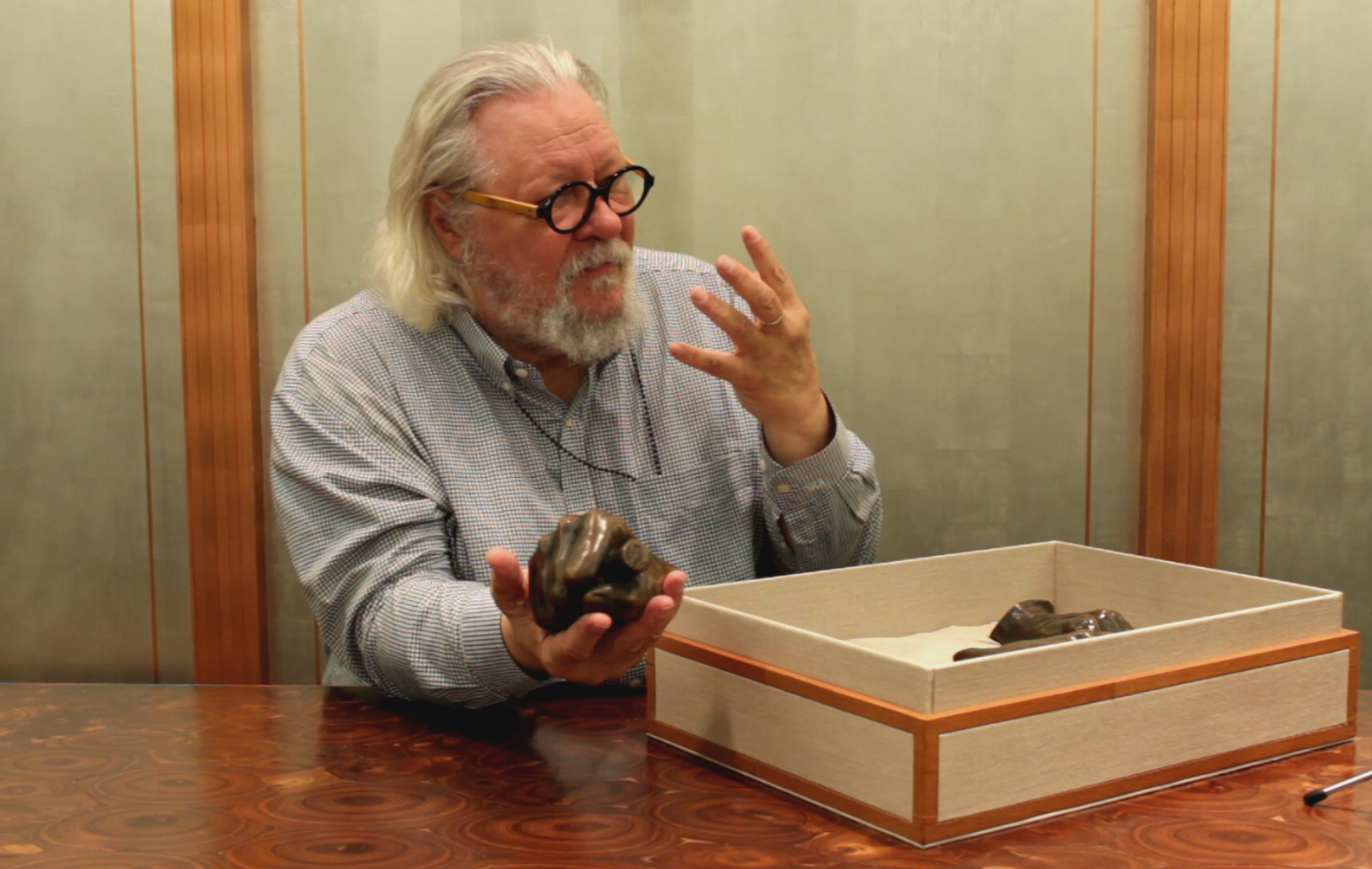 Mark Dimunation, Chief of Rare Books, with the original casting of Lincoln’s hand.

For Library staff
Tom Rieger, Supervisor of Digitization Services, sees this training as an opportunity to educate staff on techniques for digitizing three-dimensional objects. In his interview with Kinedy, he emphasized how many things are possible with 3D technology: “we are only limited by our imagination. [Photogrammetry allows us to produce] a fully formed object that is an accurate representation of the original.” 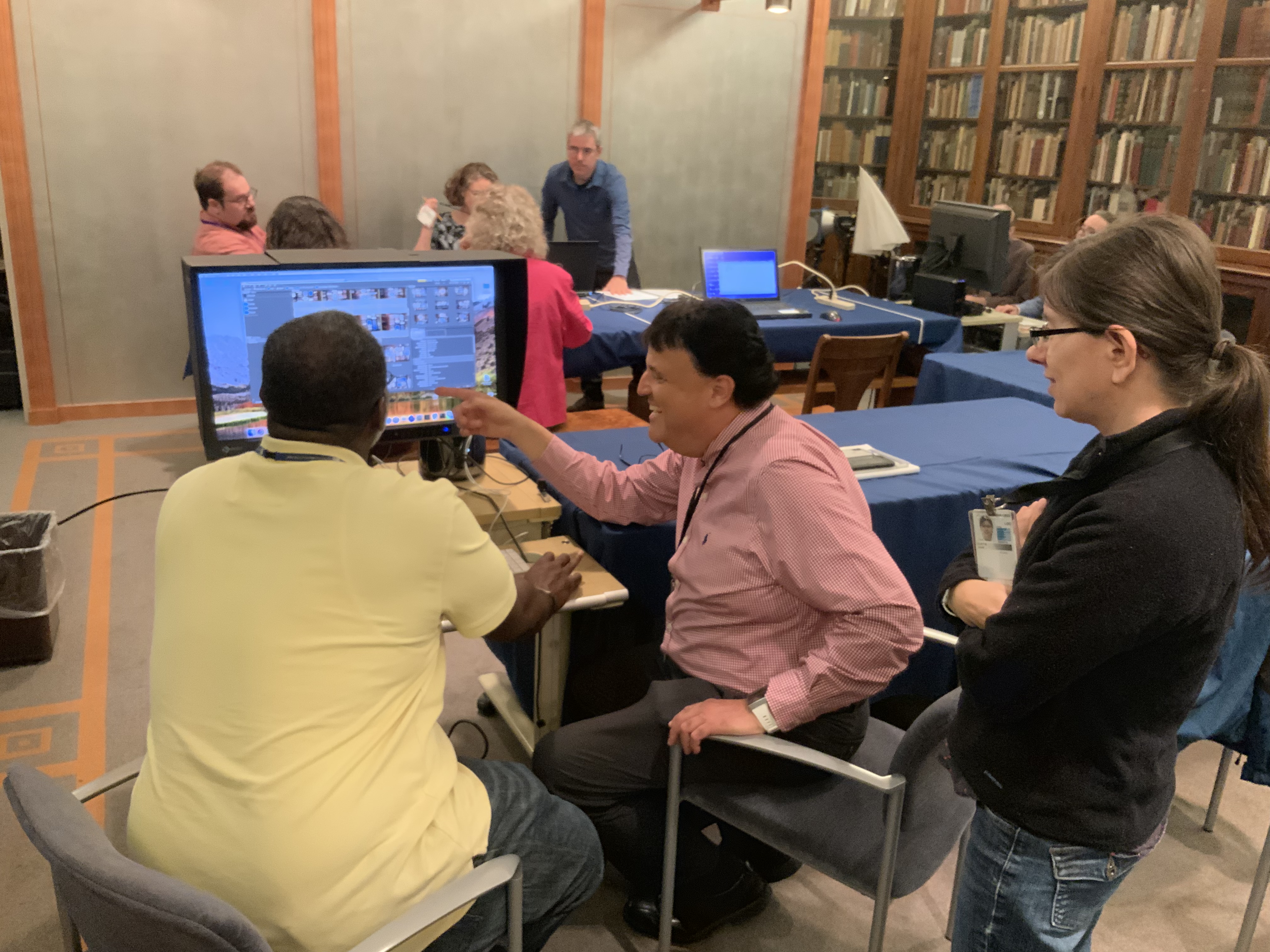 Opportunity for Collaboration
Lastly, LOC 3D gave the Library of Congress a unique opportunity to collaborate with federal cousin and major player in applying 3D technologies for cultural heritage: the Smithsonian’s Digitization Program Office. With the help of developer Ki Lee and user experience designer Jamie Bresner, the LC Labs team was able to implement the Smithsonian “Voyager,” an open-source web viewer created by the Smithsonian team to showcase their 3D models online. Two Smithsonian 3D specialists, Meg Dattoria and Anaís Perez, joined the week-long training in photogrammetry to offer their experience and expertise as Library of Congress staff acquired new skills in photogrammetry. 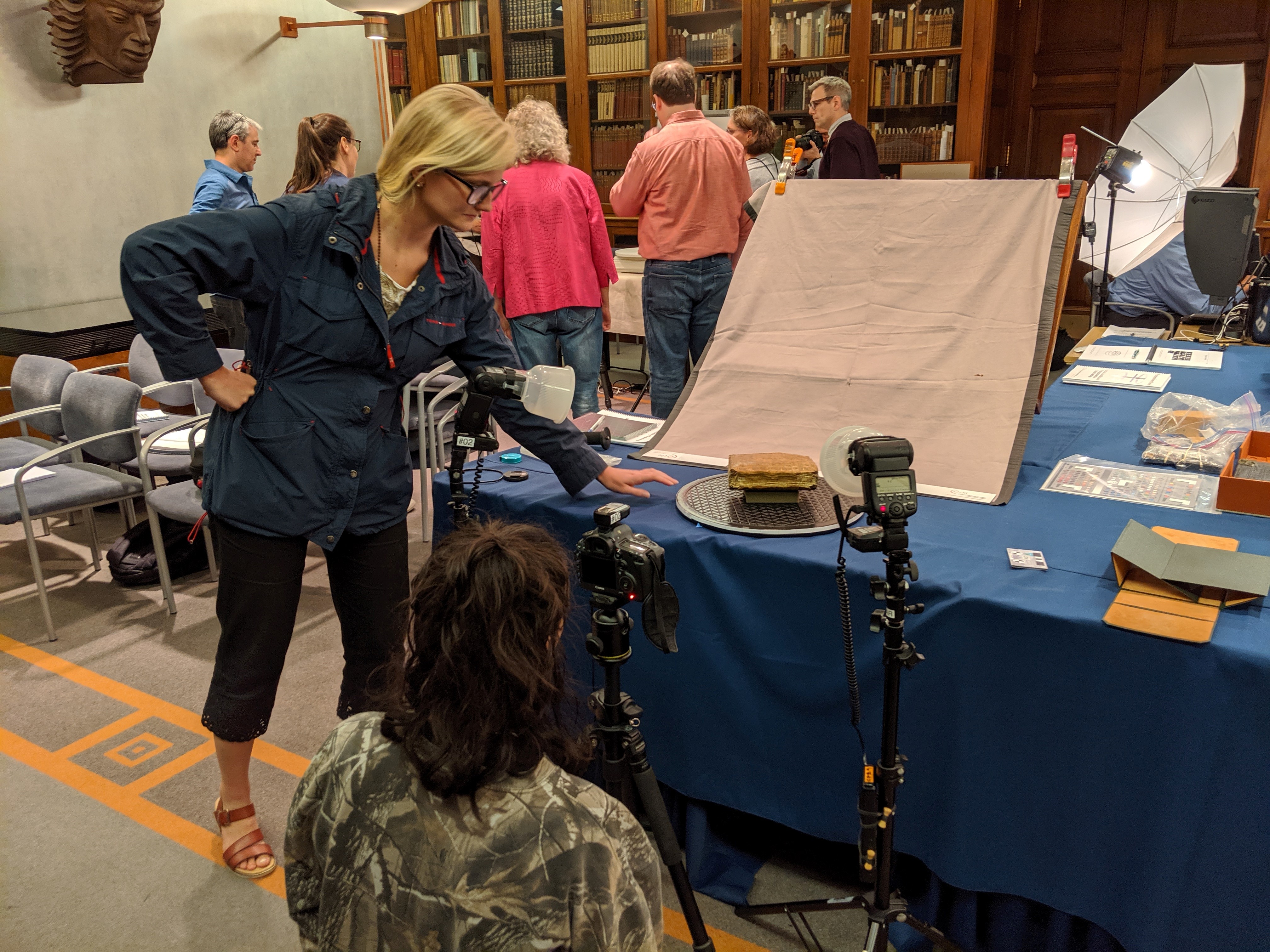 Looking Ahead
This collaborative element of the LOC 3D pilot illustrates perhaps one of the most exciting outcomes of all—that the use of new technologies can also enable collaboration, illuminate new pathways of inquiry, and serve multiple and diverse audiences.

Please join us by trying out these models, incorporating them into your work and/or using them creatively in ways we haven’t considered! Whatever you do, we’d love to hear about it. Leave comments below or reach us at LC-Labs@loc.gov.

← The future of public intellectualism lies in reforming the digital public sphere
To address the rise of predatory publishing in the social sciences, journals need to experiment with open peer review. →