Have you noticed that our LC for Robots page has a new look this month? We integrated feedback from visitors, discussion, and a card sorting exercise to consolidate resources for machine-readable access to Library of Congress digital collections. We’re looking for your feedback, but first, learn more about how we approached this redesign.

In September 2017, we launched Library of Congress Labs with help from our friends in the Library’s Web Services. Bundled in the mix was our LC for Robots page. It was envisioned as a stepping off point for research using digital collections. The page offered access points for multiple data sets and APIs available at the Library of Congress. We wished to highlight the variety of resources and included tutorials and documentation to guide or prompt their use. And with the launch of this site, these resources were presented together for the first time on a single Library of Congress page. 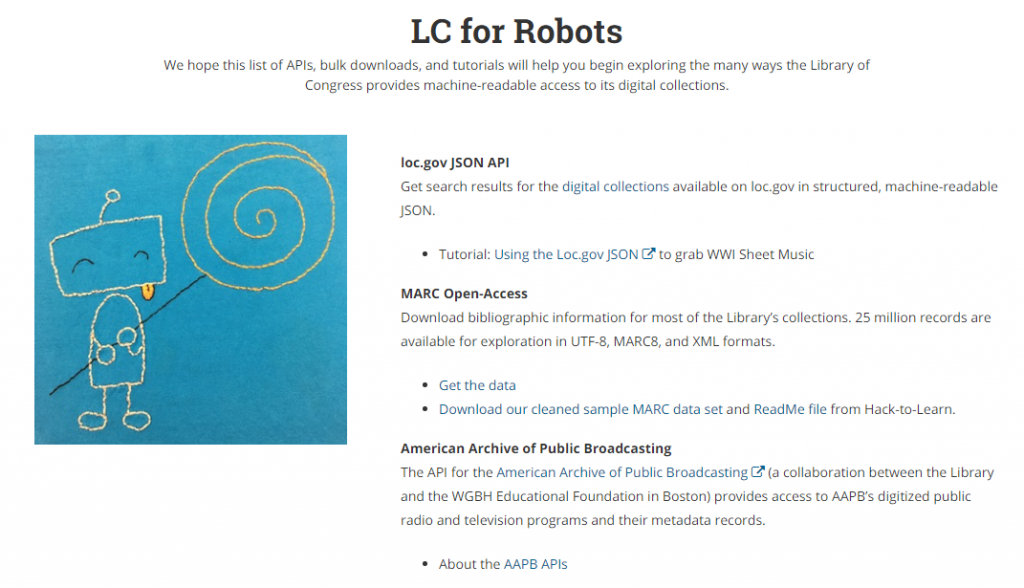 Our initial layout of resources was topical, based on the collections and subject divisions at the Library of Congress. For example, we called out separately the APIs for Chronicling America, the American Archive of Public Broadcasting, and loc.gov JSON API. Affiliated Jupyter notebooks tutorials and documentation were also arranged in relation to the collection.

Building up and Breaking down LC for Robots 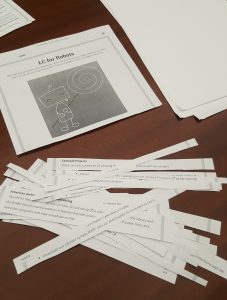 Breaking down LC for Robots

From the start, we anticipated that we would regularly add other data sets and tutorials to LC for Robots. Still, it became more difficult to pinpoint what we were presenting even as we began to incorporate additional resources. For example, how might a visitor to compare tutorials in Jupyter notebooks to decide which approach they wanted to take to accessing images? They would have to scan the page to find and explore them. It was time to rethink what we wanted to communicate based on the audiences we planned to serve and their goals. We discussed new approaches to presenting information on the page in December. We also met with colleagues in Web Services to discuss the general presentation of the Library of Congress Labs site. Part of that discussion focused on our plans to grow with content, including on LC for Robots. We looked ahead and made plans to carve out time in the New Year to assess our approaches with LC for Robots.

In January 2018, visiting software development librarian Laura Wrubel led us through a card sorting exercise. We started by printing out the LC for Robots page. Then, we promptly cut out each section and bullet into their own “cards.” We also had blank strips of paper at hand so that we could add elements or resources missing from the LC for Robots page.

We took 5 minutes to reflect on the feedback we’ve received since September and audiences we sought to serve. With that framing, we arranged the slips to correspond to those needs. Reorganizing the information required some of us to create new headings and groupings. Next, we took turns talking through the audiences we considered, the proposed layout, what might not fit, and what was missing. As you can see below, we shared perspectives about serving our visitors but had different ways of visualizing the best way to arrange Library of Congress resources.

Then, we combined our overlapping ideas to set out a revised layout. At this step, we discussed what each section represented or at whom it was aimed, and captured images to make this revised layout a reality. We ended the session by reflecting on the ways this discussion sparked ideas about better structure for the page and where we might have challenges in the future with increased content. So, what surfaced as key considerations in our attempts to improve the page? 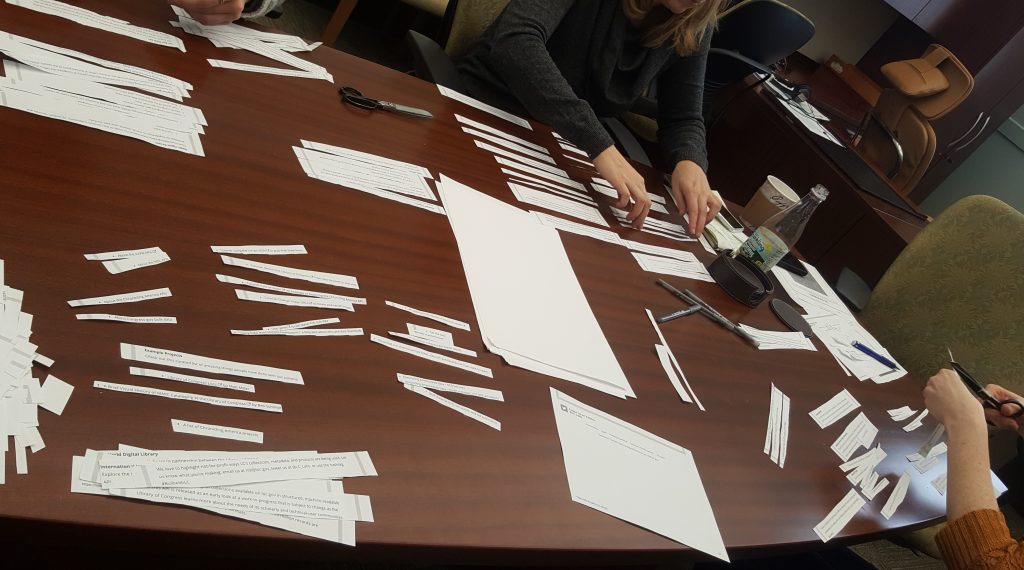 Laying out our LC for Robots options

Skills and Experience of LC for Robots visitors

Visitors to LC for Robots have offered feedback and expressed different needs and interests in pursuit of their goals. Some visitors seek to get started with data; through bulk download or via API. Other visitors wish to integrate Library of Congress APIs in course instruction or in interactive sessions. This set of visitors would be interested in exploring documentation more closely. Another cohort expressed interest in trying these resources; they also signaled a need for more guidance for getting started. 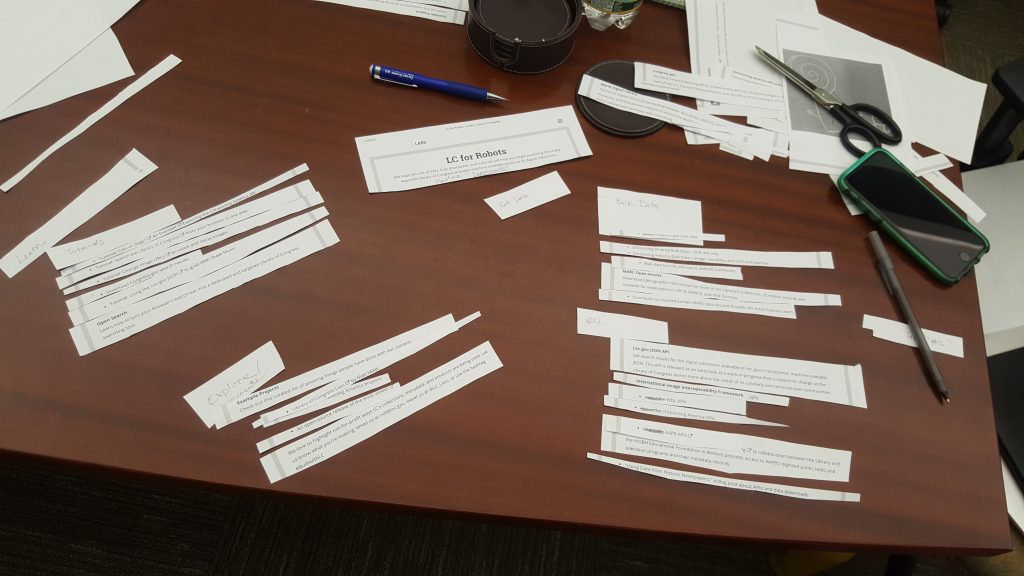 Communicating where to start with specific tasks using a revised grouping

As a group, we focused on 3 main actions that could be supported by the re-arrangement of resources on the LC for Robots page:

A-P-I-s and spelling out documentation

We had originally provided links to API pages and documentation details. Looking more closely at the sections, some of the information began to appear redundant as it was more appropriately presented with supporting context elsewhere on Library of Congress sites. We took this turn toward brevity as our goals are to showcase and offer a paths to use resources. Rather than LC for Robots becoming a definitive, primary access point, our approach builds on the fantastic work of our Library of Congress colleagues in documenting their collections and APIs.

As a result, we have a revised look! 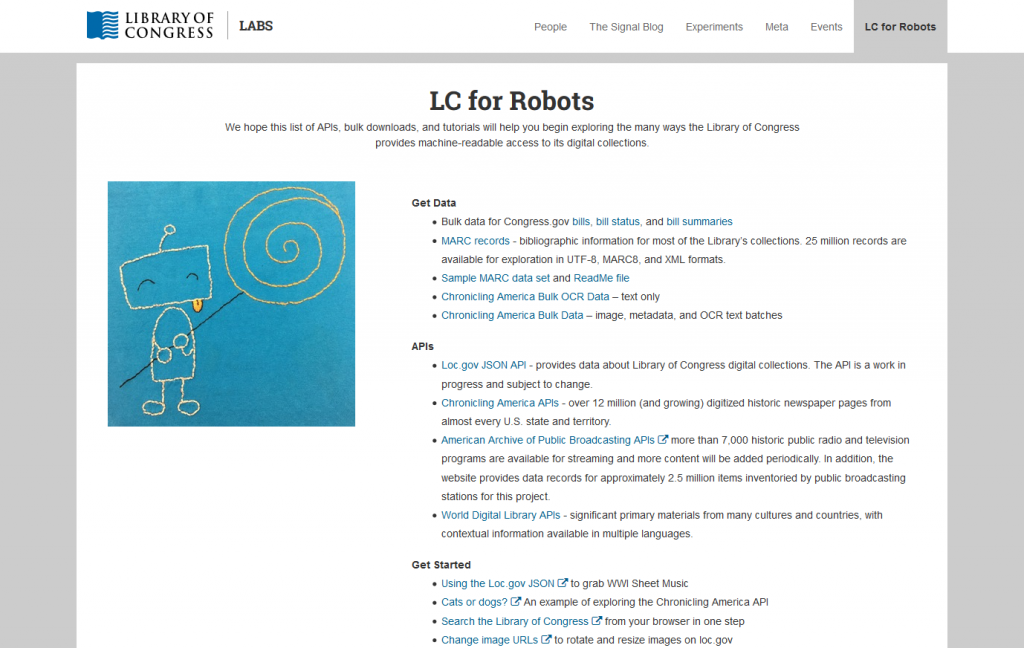 The revised LC for Robots!

You’ll see that we’ve divided the content into three sections in an effort to help visitors to more quickly find what they’re seeking:

Interested in running your own card sorting exercise? See this guide from 18F.