We’ve been delighted to have Library of Congress Innovator-in-Residence Jer Thorp with us since October. During the first three months of his residency he has connected with staff, visited collections, and explored forms of data to make better sense the inner workings of the Library. Jer has been weaving together those threads with experiments and other works in progress.

Turning the Process on its Ear

Jer has made record of his activity from the start via interviews with Library staff and from within the Library of Congress main reading room and stacks, while reflecting on what he has encountered. The result is the podcast “Artist in the Archive.” It’s on a roll with two episodes so far. The podcast follows a format that includes detailed discussions with National Digital Initiatives Chief Kate Zwaard, Curator of the Jay I. Kislak Collection of the Archaeology and History of the Early Americas, John Hessler, and Director For Acquisitions And Bibliographic Access, Beacher Wiggins. These longer discussions are framed by segments with Library of Congress curators and archivists such as Meg McAleer and Todd Harvey sharing share vignettes of unique collections; from Sputnik’s launch to folk revival in New York City, bringing the perspectives of the past to life. Listen to the first two episodes of “Artist in the Archive” and share your thoughts and questions with Jer. You can also find transcripts for episode one and episode two, as well as finding aids with images of objects described in episodes one and two.

Sometimes the language of the Library can be on the tip of your tongue; other times, you’d need a glossary to define the experience. For example, are you on the hunt for Hapax legomenon? Misplaced your best Volvelle? Learn more about unique and obscure terminology from the library world in this crowdsourced glossary Jer compiled in October. Finding your favorite library term missing? Let Jer know in the comments or on Twitter.

“A person of encyclopedic learning” according to Merriam-Webster; a polymath is an individual whose expertise spans diverse subject matter or disciplines. If you’ve listened to episode two of Jer’s podcast, you’ll have learned that the subject matter expertise of creators is captured in the name authority field in MARC records. What can these records tell us about the careers of authors? Armed with this data and a handful of questions, it is possible to probe the edges and overlaps of expertise; such as the painter-pianist-composer Ann Wyeth McCoy (sister of artist Andrew Wyeth).

While gathering stories from within collections here at the Library of Congress, Jer has also been making queries within the 25 million MARC records. Jer created a network map by taking approximately 9 million name authority files from the MARC records as a starting exercise. Next, he returned to those same people and calculated their movement across the map. He shared this exercise with reflections on its promise and potential problems with this approach on Twitter, along with the code. See this Twitter thread for more details and examples, such as a poet-diplomat-composer (Oswald von Wolkenstein) and a soldier-shoemaker-postmaster-teacher-surveyor-civil engineer-photographer-deacon in one Samuel Chase Hodgman. 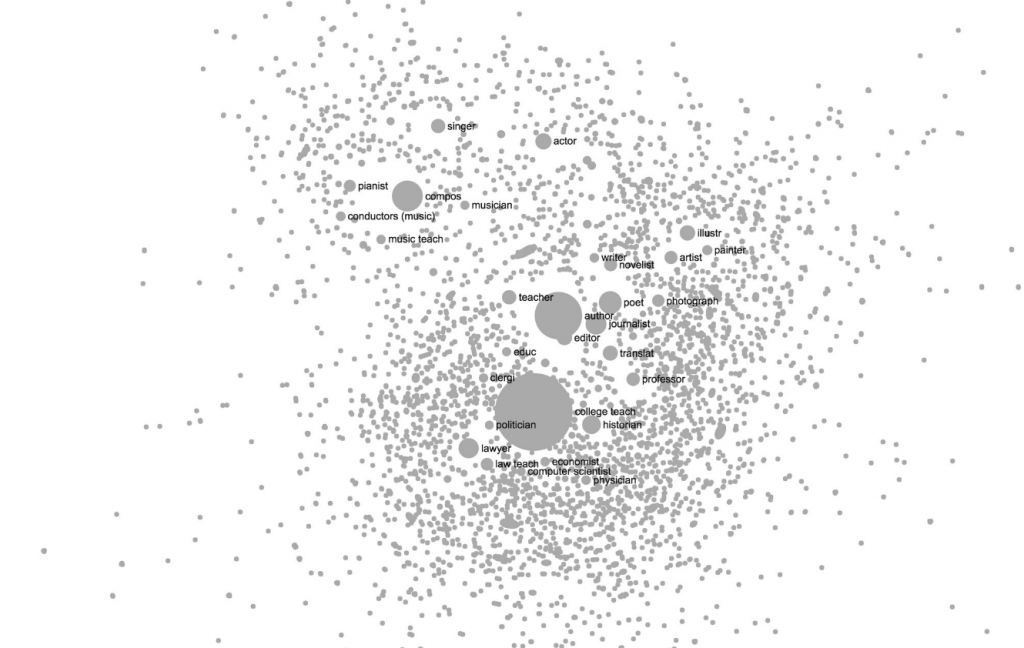 Since MARC records also offer a lens on migration of creators, can those records tell us more about the centers of thought, publication, and social life? In the work-in-progress BirthyDeathy, Jer has used the locations and dates of birth and death in name authorities files to map the movement of historical figures, politicians, and authors. We’re looking forward to seeing more about what relocation signals over time as people arrived in and departed from cities like Boston, Berlin, Madrid, St. Petersburg, Vienna, Chicago, and San Francisco. 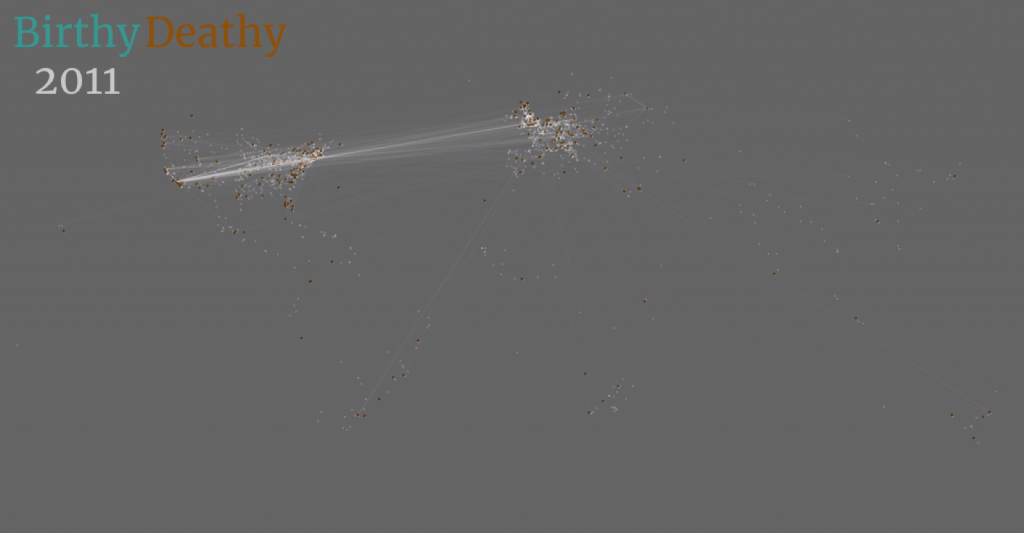 Here’s what Jer had to say about what lies ahead with his work:

“The Library is of course well known for it’s grand holdings – Jefferson’s draft of the Declaration of Independence, the Waldseemüller map, the Gutenberg Bible. What has been striking to me is to find out how much everyday humanity is documented in the archives: children’s drawings of Sputnik, oral histories of tug boat captains, photographs of farm workers during the Great Depression. I’m eager to continue exploring novel ways to activate these collections.”

You can learn more about Jer’s work on his Library of Congress Labs Innovator-in-Residence page and explore his documentation and code.

← Never mind the policymakers, a more nuanced understanding of the diverse roles in change processes is required
Making a Newspaperbot →