The following is a guest post by Kate Murray, Digital Projects Coordinator at the Library of Congress.

In this interview, Kate Murray talks with Duff Johnson, PDF Association Executive Director, about the role of the PDF Association in standards and development communities.

Tell me about the mission and goals of the PDF Association

Duff Johnson, PDF Association Executive Director: The PDF Association is a non-profit industry association for PDF technology developers and implementers. It exists to promote awareness and adoption of ISO-standardized PDF technology. Members include over 130 member-companies, over 20 non-profit organizations as Partners, including our newest members the Library of Congress and National Archives, and numbers of individual consultants. Like the ISO committees whose products it promotes, the PDF Association is a vendor-neutral space; the largest and the smallest of companies have the same vote in all Technical Working Groups and on the Board of Directors.

What role does the PDF Association have in the development of PDF standards documents?

Johnson: The PDF Association has a proven track-record in terms of formalizing the interpretation and best-practice use of ISO standards for PDF. The organization began as the PDF/A Competence Center in 2006 because the founding companies all saw the need to share a common understanding about the PDF/A (ISO 19005-1) standard, published the previous year. The Isartor Test Suite for PDF/A-1b and several Technical Notes resulted, all of which helped developers produce complimentary implementations of PDF/A.

What other projects has the PDF Association participated in?

Johnson: More recently, the PDF Association, as part of the veraPDF Consortium, took a leading role in producing the veraPDF Test Suite, including complete coverage for all conformance levels of PDF/A-1, A-2 and A-3. We also published a new Technical Note detailing the industry-supported understandings reached during the course of the veraPDF project.

How can the Library of Congress gain from PDF Association membership?

Johnson: The Library’s participation will foster enhanced relationships with industry, providing more opportunities for the Library to communicate its needs to the community that develops the software which content producers and publishers use for digital documents, and more. Partner organizations to the PDF Association, now including the Library of Congress as well as the National Archives, can leverage this vendor-neutral space to access expertise from the global community of PDF technology developers, and participate in developing new standards and other formal documents to further best-practice use of PDF.  A recent example of just such an effort was the formation of the PDF/raster TWG to explore the TWAIN Working Group’s request for a PDF subset enabling scanners to produce PDF files directly, without TIFF images. The result, PDF/raster 1.0, is already adopted in the TWAIN Direct specification. 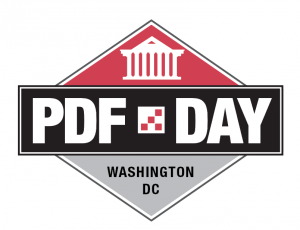 Learn more about PDF Day to be held in January 2018 in Washington, D.C.

How is the PDF Association reaching out to other members of the cultural heritage and government sectors?

Johnson: Inspired in part by the new memberships of the Library of Congress and NARA in the organization, we’re organizing a PDF Day for January 29, 2018 in Washington DC. PDF Day is an PDF Association educational event comprised of non-commercial presentations on various aspects of PDF technology.  The Library of Congress will be among the presenters. Registration is required for PDF Day with discounts for government and military personnel; additional details available at the PDF Day website.

← The crumbling façade: my experience working for an essay mill
Pizza Party! →