The following is a guest post by Kate Murray, organizer the FADGI Audio-Visual Working Group and Digital Projects Coordinator at the Library of Congress.

The Federal Agencies Digital Guidelines Initiative (FADGI) is pleased to announce the publication of a new version of the MXF AS-07 Application Specification (with CC BY-SA 4.0 license) and its accompanying set of revised graded sample files. 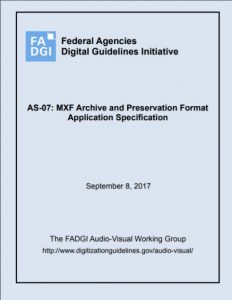 As mentioned in a previous blog post, AS-07 can be thought of as a sort of “cookbook recipe for a particular subtype of the MXF standard.” MXF, or the Material Exchange Format, is a wrapper or container format for video and audio media which is defined across a series of standards documents published by Society of Motion Picture and Television Engineers. AS-07 offers a detailed specification for a subset the MXF container which highlights functionality essential for archiving and preservation. In addition to SMPTE standards, AS-07 also enumerates a number of permitted encodings and other components from the International Organization for Standardization and International Electrotechnical Commission, the European Broadcast Union, and special White Paper documents from the British Broadcasting Corporation.

The core user group for AS-07 will be archives that maintain complex audiovisual content for the long term. Memory institutions with older obsolescing analog and digital videotapes in their collections, especially complicated commercially produced broadcast materials, will wish to archive the highest possible quality of image and sound (uncompressed or losslessly compressed), as well as retaining source data such as multiple timecodes, captions and subtitles, and also embed metadata that will support authentication and management of the content for the long term. 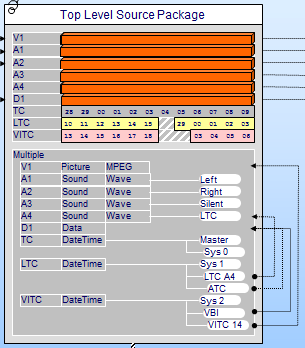 James Snyder, the Senior Systems Administrator at the Library’s Packard Campus in Culpeper, Virginia, said, “The availability of the new AS-07 specification is terrific news.”  The facility has been digitizing historic videotapes for preservation since 2009.  “We have been using an early implementation of the MXF file format and lossless JPEG2000 picture encoding,” Snyder said, “successfully creating nearly two hundred thousand preservation masters.”  In addition, the Library has acquired tens of thousands of MXF files in this format from the American Archive of Public Broadcasting (AAPB) project.  The updated specification, Snyder said, will enable the Packard Campus “to begin capturing closed captions as text suitable for indexing, embed additional metadata, and correct MXF formatting errors in the early-implementation files.”  In the future, the Packard Campus team will be able to “re-wrap” their existing files (re-encoding will not be required) to bring them up to the AS-07 requirements.

AS-07 allows for a wide range of technical variety in moving image picture content typically required by memory institutions and other archives.  For high picture quality, the preferred picture encodings are JPEG 2000 picture encoding (such as the mathematically lossless version used by the Library of Congress) and uncompressed.  The rasters may range to sizes as great as 8Kx8K, and picture may be in any bit depth, color mode or space, and interlaced or progressive. Embedded metadata within the AS-07 files, especially that contained with the DMS or Descriptive Metadata Schemes, make the file self-describing so that they would retain their value even if they were the only extant copy of an item.

The AS-07 development project is led by the Library of Congress and other members of FADGI in collaboration with community and commercial collaborators. While AS-07 is vendor neutral by design, at various times throughout the development of the specification, the FADGI team heard from outside experts in broadcasting and other parts of the professional video industry. Under both the AMWA and FADGI auspices, there was active participation from several external commercial entities.  From the beginning of the project, long-time FADGI consultant AVPreserve (through audiovisual standards expert and founder and president Chris Lacinak) served as the principle investigator and data wrangler. George Blood of George Blood LP, a Philadelphia-based provider of services to memory institutions archives, was a strong early contributing member of the AS-07 working team while MetaGlue (US and UK-based developer of specialized applications for broadcasters, and home base for MXF standards expert Oliver Morgan) and EVS (Belgian-French provider of production and archiving systems for broadcasters, and home base for MXF standards expert Valérie Popie) were engaged as paid expert advisors. In addition, Cube-Tec (German provider of production and archiving systems, home base for SMPTE standards expert Jörg Houpert) contributed to the project as an expert reviewer of the specification language and sample files because they saw value in a process that would establish an open, public specification. The collaboration with industry is essential to the continued adoption and success of AS-07 because it’s the tools and workflows that make AS-07 compliance and integration possible. 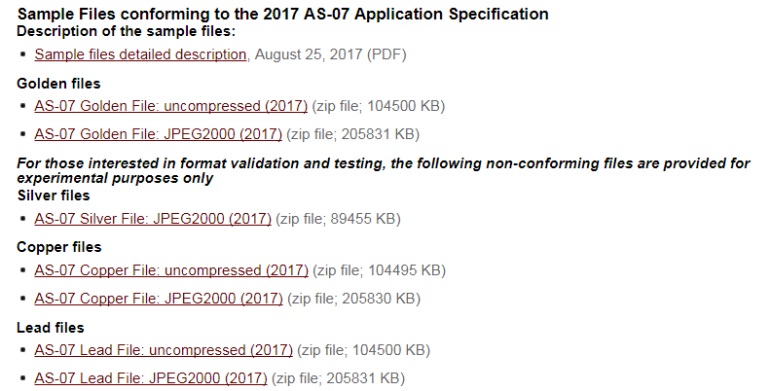 AS-07 graded sample files, courtesy of EVS for FADGI

Jörg Houpert, CEO of Cube-Tec said, “We felt it important to actively participate in the detailed review of the published AS-07 draft specification and sample files. Including AS-07 functionality into our Quadriga video digitization system helps fill the gap in the cultural heritage community for transferring of video tapes into robust and self-describing archive files on a large-scale.” The AS-07 team agreed that Cube-Tec’s and others’ active participation in the open review periods provided invaluable industry perspective on the project.

FADGI also has plans to work with the open source community to build AS-07 capabilities in a variety of systems for different communities of practice, including developing an open source tool to batch embed metadata into MXF files.

While previous versions of AS-07 were published through AMWA, the most recent September 2017 version is published by FADGI. For more information about the history of AS-07 and a complete list of updates in the new version, refer to the FADGI website.

← Where’s the evidence? Obstacles to impact-gathering and how researchers might be better supported in future
Despite uncertainty over EU academics’ future, the brain drain hasn’t begun yet →