Starting this week, acclaimed data artist Jer Thorp began his tenure as the 2017 Library of Congress Innovator-in-Residence. He will spend six months with the National Digital Initiatives team exploring the Library’s digital collections and creating an art piece that will be displayed in the Library’s public spaces. 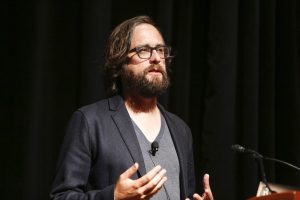 Jer Thorp is an artist and educator from Vancouver, Canada, currently living in New York. Coming from a background in genetics, his digital art practice explores the many- folded boundaries between science, data, art and culture. His work has appeared in a wide variety of publications, including Scientific American, The New Yorker, Popular Science, Fast Company, Business Week, Popular Science, Discover, WIRED and The Harvard Business Review. From 2012 to 2012, Jer was the Data Artist-in-Residence at the New York Times.

Jer’s data-inspired artwork has been shown around the world, including most recently in New York’s Times Square, at the Museum of Modern Art in Manhattan, at the Ars Electronica Center in Austria and at the National Seoul Museum in Korea. In 2009, Jer designed a custom algorithm which was used to place the nearly 3,000 names on the 9/11 Memorial in Manhattan.

Jer’s talks on TED.com have been watched by more than a half-million people. He is a frequent speaker at high profile events such as PopTech and The Aspen Ideas Festival. Recently, he has spoken about his work at MIT’s Media Lab, The American Museum of Natural History, MoMA and NASA’s Jet Propulsion Lab (JPL) in Pasadena.

Jer is a National Geographic Fellow, a Rockefeller Foundation Fellow and an alumnus of the World Economic Foundation’s Global Agenda Council on Design and Innovation. He is an adjunct Professor in New York University’s renowned Interactive Telecommunications Program (ITP) and is the Co-Founder of The Office for Creative Research. In 2015, Canadian Geographic named Jer one of Canada’s Greatest Explorers.

Jer will be sharing his goals, progress and process in blogs and podcasts over the coming months, so please stay tuned to The Signal and the @LC_Labs feed to learn more about what he will create. ”I am immensely excited for the chance to work at the Library of Congress. To dig deep into its astounding archives, to collaborate with its extraordinary librarians, researchers and technologists, and to engage in meaningful ways with its millions of visitors– it’s a dream come true, ” adds Jer.

The Library is establishing a broad Innovator-in-Residence Program to support new and creative uses of digital collections that showcase how the Library enriches the work, life, and imagination of the public. Last year’s inaugural Innovators were Library staff members Tong Wang and Chris Adams. During Tong’s time with NDI, he created the Beyond Words crowdsourcing application which has just launched as a pilot. NDI targeted artists for the 2017 Innovator-in-Residence program to create public, engaging and informative pieces from Library of Congress collections and data. In 2018, look for a announcement about the first open call to apply for a residency. We are especially interested in hearing from journalist and writers who want to utilize the Library’s historical data sets for in-depth reporting. The Innovators and their work embody the kind of exploration that labs.loc.gov is meant to encourage. We are thrilled to welcome Jer as our first artist Innovator-in-Residence and look forward to sharing with you the beautiful and thought-provoking work we are sure he will produce.

← Taking back control: the new university and academic presses that are re-envisioning scholarly publishing
On the co-production of research: why we should say what we mean, mean what we say, and learn as we go →