The SAGE Handbook of Digital Technology Research seeks to explores the issues of rapid technological development, social change, and the ubiquity of computing technologies which have become an integrated part of people’s everyday lives. At nearly 500 pages it is more detailed and more technical than many casual readers will want, but as a comprehensive overview to digital technology research it’s a very nicely edited collection, writes Jen Tarr.

This originally appeared on LSE Review of Books. 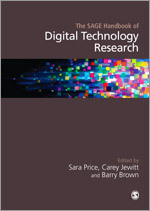 This handbook is a big, brave synthesis of current research in digital technologies. Brave, because books in the field of digital technology tend to look dated quickly, so they need to offer something that goes beyond the impact of individual technologies that may be obsolete soon after the book is published. For example, early 1990s writings about the online environment as ‘virtual’ and separate to the ‘real’ one look increasingly implausible in a world where both can be inhabited simultaneously. Fortunately, the SAGE Handbook of Digital Technology Research provides plenty of scope for engagement beyond individual digital technologies by situating them historically and theoretically and reflecting on the broader issues involved in digital technology research, as well as the applications of specific technologies.

The introductory chapters provide a blueprint for the rest of the book in terms of their detailed approach. Beginning with the wartime development of computing technologies and reflecting on the emergence of digital electronic computing in the 1930s and 1940s, Paul Ceruzzi’s chapter ‘The Historical Context’ is an overview of specific technological turning points that have led to the development of current digital technologies. In ‘The Field of Digital Technology Research’ Charles Crook takes us through common research approaches to digital technologies by beginning with the example of a digitised version of Miles Davis’ ‘Kind of Blue’, which he owns on CD and in MP3 format. He argues that while analog technologies had an agreeable, nearly visible match between the grooves of an LP and the sound which emerges from it, digital formats which translate sound into a series of 0s and 1s are much less easily comprehended. The shift toward digitisation shapes both how we interact with material artefacts and our social lives, with the advent of social media through which music and other objects can be shared, linked to, commented upon, and manipulated. Crook takes us through the key elements in debates about virtuality and immateriality in digital research, the impact of the digital, and the digital as prosthesis, representation, and coordination of mediating digital technology within social exchanges. Throughout, his emphasis is on the material reality of the technologies and what they enable. From LPs to CDs to MP3s and back again. Credit: Simon Collinson CC BY-NC-ND 2.0

There is a similar focus on the materiality of digital technologies in Anna Kouppanou and Paul Standish’s chapter, ‘Ethics, Phenomenology and Ontology.’ They take the ethics debate beyond the obvious questions of surveillance and privacy, the ‘reality’ of digital life and the vulnerabilities it engenders, instead emphasising that all technology is inherently value-laden and is implicated in ethics as a result. They give the example of Facebook’s demands for the constant renewal of presence there through comments, likes, and posts and how responses are streamed and marked as ‘top stories’, concluding ‘it not only allows the inscription of traces as a construction of your self but also constantly rearranges these traces in order to strengthen your presence – always on the pretext of bringing you closer to your friends and interests (p.112). While the author’s use of Heiddegger’s phenomenological approach may be a bit obscure to readers hoping for a more basic overview of ethics and digital technologies, their emphasis on the social and its interrelationship with material realities of digital technology is welcome.

While much of the book relies heavily on Human Computer Interaction’s approach to design, challenges such as those in Laurel Swan and Kirsten Boehner’s chapter, ‘Design Research: Observing Critical Design’ provoke questions about what design itself can, and should, do. This kind of design is a form of critical thinking, forming a challenge to design that reinforces the status quo by being thought-provoking and uncomfortable. For example ‘Life Support’, exhibited at the Royal College of Art in 2008, explores the boundaries of companion animals by proposing the development of a transgenic sheep which would take on the kidney functions of a patient with renal failure, linking the two in parasitic symbiosis. It raises questions of how far we are willing to go in preserving human life and how much we can push the boundaries of accepted animal companions such as guide dogs. Other critical design projects discussed include a microbial fuel cell made from the decaying human body as a way to memorialise loved ones, and ‘biojewellery’ made of tissue derived from couples’ bone chips and cultured to form rings which can then be worn by the partners to mark their attachment. Even when such projects make us recoil in disgust, they raise important social questions about the limits of the body, technology, and the interaction between the two. While HCI is centred on the here-and-now and concerned with utility, critical design can provide tools to reflect on the limits of digital technologies and ask questions that go beyond the status quo, examining a range of values beyond mere usability to ask what we value and how we want to live.

Overall the book assumes some prior knowledge and experience with the topic, and could in places do more to link HCI approaches back to other kinds of social science research. A novice researcher looking for a way in to digital technology research may initially feel ‘at sea’ amongst all the topics covered. At nearly 500 pages and £95 it is more detailed and more technical than many casual readers will want, but as a comprehensive overview to digital technology research it’s a very nicely edited collection.

Jen Tarr is Lecturer in Research Methodology in the Methodology Institute at the London School of Economics. She holds a PhD in Sociology from Goldsmiths College, University of London. She was previously a lecturer in Sociology at Trinity College Dublin, and has also taught at Goldsmiths College and the University of Sussex and been a Research Fellow at the London College of Fashion. Read reviews by Jen.